This week’s Sister Spotlight is Wendy “Arisora” Yang! This is her first semester as a sister as an official Sigma, and in my interview with her she reflects on what being a Sigma has meant to her! Read more below about her love for K-pop and her long experience as a boarding school student! 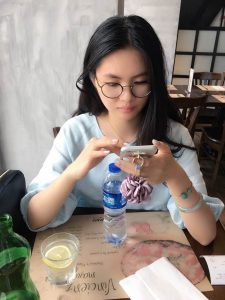 Question 1: You’re our first featured Neophyte (“neo” for short, meaning a member that joined the previous semester)! What do you want people to know about being a Sigma?

I really appreciate the opportunity to become a Sigma sister. Since I am new to the sorority, I would say I benefitted a lot from the intake process. It was a little overwhelming to me at the beginning, but I think but it was an incredible experience and makes Sigma unique. As an only child and someone who has been in boarding school for the entire life, I really want to thank to my program educator for giving me a twin!!! We supported each other and depend on each other during the process and really get to know each other. I know that when I face down time and sorrow, there will always be sisters there to support me.

Question 2: Last semester you were a choreographer for District K, GW’s K-pop dance cover club. How did you come to love K-pop and especially K-pop dances?
I got to know K-pop when I was a sophomore in high school. One of my best friends from South Korea was forming a K-pop cover dance team and invited me to join her team since I had background in school dance team from both primary school and middle school. I did not officially trained to do K-pop style dance before, and was in a hard time to make those waves and vibes, so my Korean friend taught me everything about K-pop dance. She was a former trainee at JYP Entertainment before she came to US. I learned a lot techniques from her and we performed a lot girl group dances such as F(x)’s Rum Pum Pum Pum, La Cha Ta, and so on. Under her influence, I started to listen to K-pop and became a big fan of Infinite. I did not count the exact number of dances I know, but I do know most K-pop songs’ key point dance if they are released after 2012. 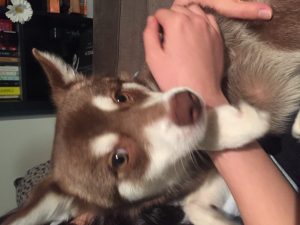 Question 3: Tell me about your childhood a little more. You were in boarding school for so long, which is pretty different from most people. How has that shaped you to who you are now?
I would say the most different part is I am able to keep my room clean lol. There are pros and cons to be a boarder for over fifteen years now. The pros are I know how to do laundry, how to not mess up my room, how to live with other people, and maintain a regular work and rest. All of these formed me to be a very independent woman. I still remembered how hard I cried every day during the first week in my kindergarten. When I entered primary school, I became the one who comforted other students who just become a boarder. I always solve problems by myself before I seek for help. However, there are also cons when living under regulation for so long. College is so different from the previous boarding experience since we no longer have study hours, regular class schedules, or lights-out time. It was hard for my roommate and me to live together at the beginning since I still maintain a regular schedule which is a habit now, while my roommate is a night person. It took a while for us to figure out suitable lifestyle for both of us.

Question 4: After coming to the U.S., has your view of the world changed? If so, how? What are the biggest differences between living in China and living in the U.S.?
This is a tough question. Although I came to U.S. for high school, I went to an all-girl boarding high school, which is different from most people. This is a unique experience which had made me a feminist. I got a lot more chances to display my ability in school activities, theater plays, clubs and academics. In a school with only five male teachers and no more than ten male staffs already tells a lot. I was forced to rely on myself even for things that seem to exceed the capability for what a girl can do. I did five stage plays in high school, from back stage staff to stage manager. With other team members, we did all the stage setting by ourselves, from carrying decorative wood and paint cans to binding them together—a sad story about blood sweat and tears. There are two big challenges I faced to live in the States: Like most international students, the language barrier also applied to me. I was so overwhelmed in the first semester to be the only non-native speaker in many classes, especially my psychology class. Food is another thing that drives me crazy, I gained unbelievable amount of weight in my first year. I was so shocked since I eat regularly like usual but gained so much fat. I later realized that even with same amount of food, American food contains higher calories, so it is necessary to exercise here in order to keep weight.